“WHAT IT IS TO BE HUMAN: An Interview with BEN HOWE”

By Artist-initiated Interviews and Discussions / May 21, 2020 / Artist Interview / One comment

A painting is, at times, a visualized impossibility. It can become whatever the artist would yield it to be. In the case of this artist, it is a fathomless reflection into what it is like to be human.

Ben Howe is an Australian artist who was born in London. Over nearly two decades, he has explored the nature of consciousness, personal history and the incongruities of memory through his artwork, which generally takes the form of painterly investigations into the private and collective psyche. He is known for his sculptural paintings, surface variations, crowd based works and cityscapes.

Guen: “Thank you for sharing your time with us, Ben.

First things first. What prodded you into exploring visual arts? Was the interest ever-present since childhood?”

Ben: “I can never be sure, as exploring things visually has always been part of my life, but I imagine it could have come from growing up without other children to play with and having to make up my own imaginary worlds. When I was a bit older, I acquired four step siblings, and art became even more of a retreat.  Pictures became my method of communication, and my brain developed accordingly.

A solitary child and teenager, I inhaled books, reading copiously, and exhaled drawings.

While traveling the world and experiencing many life changing events, I learnt that something new and surprising could always be found in the arts, things that constantly challenge your way of thinking.

I used creativity as a means of exploring connectivity, ideology, questioning the past and trying to understand the riddles of human consciousness.”

G: “How would you describe the art community in Australia in contrast with other localities you’ve visited? And is there a significant place/culture that you feel reflects your artistry most particularly?”

B: “I’ve fallen in and out of the Australian art community over the years, and it seems so segmented that it would be difficult to describe it as a whole. There is the underground art scene, which was both developing and winding down at the same time in Melbourne when I was a part of it, as people moved into old factories, built their bohemian dreams for a decade and were pushed out again due to developments (the old gentrification thing). At the opposite side there is the competitive commercial world, which has its own problems concerning real estate, fashion and parochialism. Somewhere in between there are the academically trained artists working on their wonderful, largely unsellable projects; experimenting in their studios or homes and having to take other jobs to make a living. These are the hidden, (and often the best) artists.

There are so many people who would like to be artists in Australia, but we do not have the means of supporting them all. Restricted by geography, we have an extremely small collector base, and the only way to make a living is to reach out to the rest of the world.

Compared to other places I have visited or lived, the Australian art community feels like a middle-ground; uncertain of its identity.

Germany was amazing with its self-organized counterculture.

America was indeed the ‘land of opportunity’, but has an industry that can easily collapse under its own weight.

China was a world of extremes; from palatial studios and success far beyond what we understand in Australia, to the amazingly talented artists who had to work in the painting factories if they were lucky.

The culture of every place can change remarkably quickly, or stay the same for hundreds of years”

G: “Can you walk us through your art process? Is there a personal ritual you follow, specifically when preparing for an exhibition?”

B: “My process is constantly changing, and often develops with each project.  I always do a lot of research before embarking on anything.  Once I know what I want to do, (and importantly, why), it’s a matter of finding out how to do it.  I usually resort to my best tool, which is a form of hyperrealist painting. But within that, I may develop a method of painting that is more expressive / devoid of colour /comprised of lots of tiny marks, or maybe even smooth or out of focus.

I often work from some kind of exploration in other media, such as film or sculpture.  These become references for the paintings, which reinterpret something that is in a sense already an interpretation.”

G: “There is a vagueness about your paintings that speak into a deeper essence of humanity, whether it be a deconstructed portrait or a multitude of random strangers. What captivates you in capturing people this way?”

B: “I treat the people as avatars – figures within or part of the landscape. Projections of an idea. They are both symbols and utilities that reference the body in space, not necessarily the personality within.  That can be provided by the viewer if required.  If there is a coldness, it’s there to provide an environment of active contemplation.

With the ‘deconstructed portraits,’ the intention is to question the nature of memory and linear narrative. The viewer is invited to mentally reconstruct a face, to imagine what the original model looked like; effectively conjuring a false memory. The broader objective behind these experiments was to see whether the viewer could be complicit in the act of knowingly piecing together a memory through the contemplation of an artwork.”

G: “The (COVID-19) pandemic brought nations into a halt. The world has somehow agreed to cooperate by isolating and continuously observe physical distancing. Now, more than ever, your paintings depicting crowds as a unified breathing body seem to contain a strong sense of melancholy.

How has this predicament affected you and your art-making? Has it stimulated a new direction for your works, visually?”

B: “The intense isolation that has come to many with covid19 has always been a part of my life, so in truth nothing much has changed for my imagery. I think it is symptomatic of the broader human condition, and perhaps people are feeling it more acutely during this time. It doesn’t mean it wasn’t there before, and won’t be after.

The effect of an artwork is always subject to some sort of change, and readings of my crowd paintings may well strongly reflect the current situation.”

G: “Can you discuss about a few of your works; the stories behind their genesis?”

PASSAGE: In keeping with the topical theme of ‘covid19,’ this image contemplates degrees of distance and Isolation, whether it’s experienced alongside another person, through the loss of a person, or with someone imagined. It is the feeling of a missing part, a cherished memory.  The figures are again not based on any real person, but are intended to appear as statues, strangely weightless within the quiet landscape and the trope of a pathway with an indefinable beginning and end. 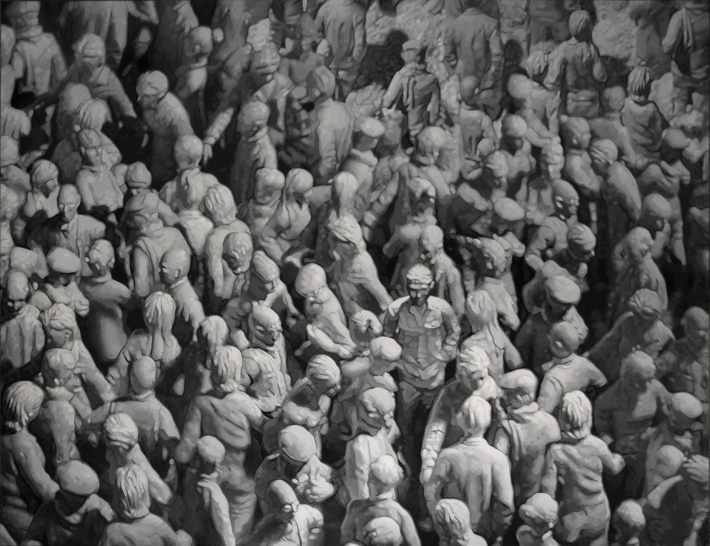 INTERVAL: This is one of my large crowd paintings.

I simulated an imaginary crowd using a series of tiny sculptures that I made based on direct observation. This was done in order to convey the idea and feeling of an assembly, without any attachment to an actual event

Stripped of any intimate character, the figures serve the purpose of icons or avatars: truncated representations of a whole, into which it is easy to project a notion of the self. From these small pieces of information a collective picture of a macrocosm can be formed.

The dioramas were photographed and then rendered in paint, using a technique that appears photographic from a distance, yet becomes more abstracted and painterly with proximity. Repetition, miniaturization, and fluctuations between representation and abstraction were used to activate links between the body, movement and memory.

UNHEIMLICH: “Developed while on a residency in China, this series reflects a more interior examination of the human psyche, and a counterbalance to my work with crowds. It depicts the peculiar association of subject to physical space.

The paintings were made with the aim of documenting and exploring the semi-conscious adaptation to new environments experienced by migrant residents, examining how people move into a space and start to inhabit it.

The paintings depict the apparent portraiture of artists against the relief of their temporary homes; minimal, concrete cells devoid of their own distinct identity save for their signature barren & derelict state.

The use of constantly shifting brushwork, sharp contrasts and spatial distortions illuminate or add information while symbolic elements, informed by the subject’s activity, or my own reaction to the space, further disrupt the illusion of sheer figurative representation.

Embracing a synthesis of both external and internal realities, the series attempts to bring together themes of dislocation, habitation and the subliminal response of the psyche towards the unknown.”

G: “Artists often make paths where there seems to be none. What do you envision for the art industry in the near future? Are you optimistic about the artists finding a way to navigate through these challenging times?”

B: “The arts always provide an important compass.  They indirectly synthesize ideas / problems into imagery that can subconsciously make sense to the broader community. Art has, and always will do this, and so will always have an inherent value.

But times are uncertain: In the past there was the establishment, then the critic, then the patron/collector/ tastemaker, and now it seems the trends are in the ambiguous hands popular app users. We live in the time of the instantly appealing image and fleeting, snowballing popularity.  It is easy for important artists to get buried in the deluge.  It’s all very confusing, and seems like the only thing to do is to keep making, regardless of what the illusive market is doing. I truly have no idea where the art industry will head next: clearly it has to move forward, but where to?” 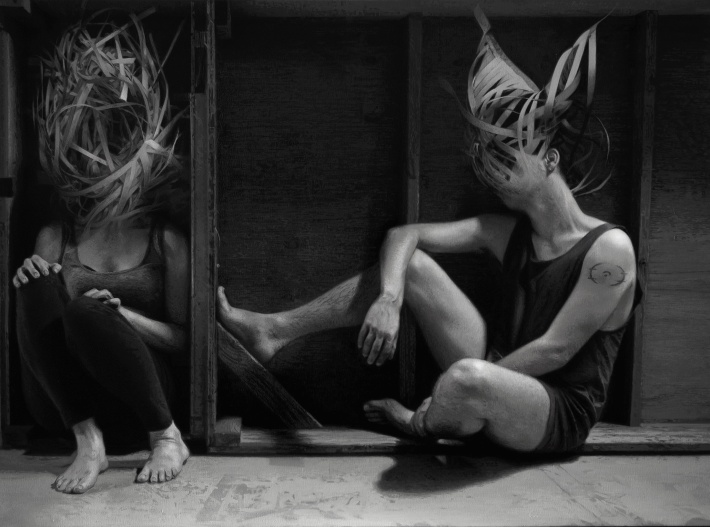 G: “Is there a message you want to share with fellow-artists going through this world wide lockdown?”

“I would hesitate to give any advice, because everyone’s situation is different. The creative industries have been hit hard throughout the world, but being used to long times of solitude, artists may be in a good place to whether the storm, and perhaps thrive (productivity wise, if not monetarily). Just keep making and don’t feel pressured to release the work too quickly. Find the right outlet. People are buying less art at the moment, and many galleries have closed, so hold on.”

About Artist-initiated Interviews and Discussions

Art Satellite is an artist initiative that will function to organize and design creative programs such as art exchanges, collaborations and exhibitions in Bacolod City, Negros Occidental, Philippines. This page was originally managed by a group of students as an output fortheir curatorial workshop under Ms. Lisa Chikiamco.
View all posts by Artist-initiated Interviews and Discussions →